In April 2018, I inquired that Arsen Avakov, the Minister of Internal Affairs of Ukraine visited the States where he held several meetings with US government representatives. In particular, Avakov met with Director of the FBI Christopher A. Wray, Deputy Assistant Secretary of State in the Bureau INL James A. Walsh, Assistant Secretary of State Dr. A. Wess Mitchell, Acting Administrator for the DEA Robert W. Patterson, Congresswoman Marcy Kaptur, Congressman Sander Levin, Congressman Andy Harris and Congressman Devin Nunes. 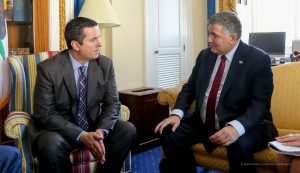 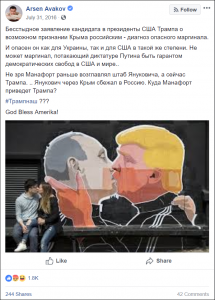 “The shameless statement of the US presidential nominee Trump on his possible recognition of Crimea to be the Russian territory diagnoses a dangerous marginal.

And he is equally dangerous for Ukraine and the United States. A marginal who indulges Putin’s dictatorship cannot be the US and the world’s guarantor of democratic freedoms…

It is not a coincidence that Manafort used to head Yanukovych’s election team, and now that of Trump’s one. … Yanukovych fled to Russia through Crimea. Where will Manafort bring Trump?”

Kenneth P. Vogel, et al. “Ukrainian Efforts to Sabotage Trump Backfire.” POLITICO, 11 Jan. 2017, www.politico.com/story/2017/01/ukraine-sabotage-trump-backfire-233446  «Ukraine’s minister of internal affairs, Arsen Avakov, piled on, trashing Trump on Twitter in July as a “clown” and asserting that Trump is “an even bigger danger to the US than terrorism.”

During his visit to the United States, Arsen Avakov asked for cooperation with the States and funding sources. I am sure American taxpayers will be much surprised to know that their tax payments are directed to support this corrupt Ukrainian politician who once insulted the US president.

Apart from Arsen Avakov, the Ukrainian delegation also included: Alexei Takhtai – State Secretary of the Ministry of Internal Affairs of Ukraine, Vyacheslav Abroskin – Deputy Head of the National Police of Ukraine, and Anton Gerashchenko – People’s Deputy of Ukraine. The mentioned government officials are also involved in high-profile corruption scandals and cover criminals working in the police. I’m going to disclose the crimes’ facts committed by the above-mentioned officials and will report them additionally. 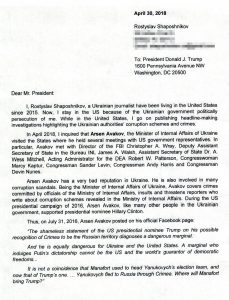 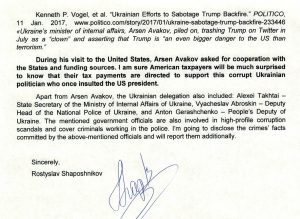