I would like to inform you about the potential threat of theft of the US financial assistance for the Ukrainian government. On March 4, 2020, Deputy Foreign Minister of Ukraine Yegor Bozhok announced that the United States will provide Ukraine with $38 million to improve cybersecurity. Yegor Bozhok reported this information after negotiations with the US Department of State. 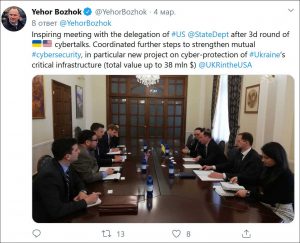 On March 19, 2020, a conference on cybersecurity in Ukraine is planned in Kyiv, which will be held at the Fairmont Grand Hotel. As speakers, the conference will be attended by: resident Agent in Charge, United States Secret Service John Liau, president & CEO, National Cyber-Forensic and Training Alliance (NCFTA) Matt Lavigna, managing Director Cybersecurity EMEAR at CISCO Lothar Renner, Minister of Internal Affairs of Ukraine Arsen Avakov and others.

Part of the US financial assistance is intended for the Ministry of Internal Affairs of Ukraine, headed by Arsen Avakov. I received information that part of the money for the purchase of equipment and software for cybersecurity in Ukraine will be converted into cash and appropriated by officials. It is also expected that CISCO will win a future tender for the supply of hardware and software for Ukraine. The concern is that the head of the Ministry of Internal Affairs of Ukraine Arsen Avakov was previously implicated in the cases of theft of state budget money and falsifying tenders.

On October 31, 2017 The National Anti-Corruption Bureau of Ukraine arrested Oleksandr Avakov, the son of Interior Minister Arsen Avakov, in a corruption case. Also, NABU arrested the former deputy interior minister Serhiy Chebotar. The suspects are accused of embezzling 14 million Hr in a case related to the supply of backpacks to the Interior Ministry. The prices of backpacks were significantly higher than market ones. Video footage has been published on the Internet where Oleksandr Avakov and Chebotar discuss an allegedly corrupt scheme to supply backpacks to the Interior Ministry. Meanwhile, in video footage recorded by the Security Service of Ukraine and recognized by courts as genuine. 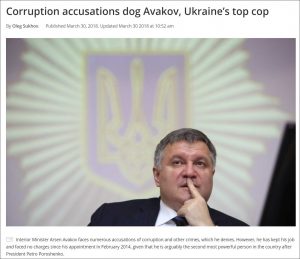 In another video, Chebotar, the Interior Ministry’s State Secretary Oleksiy Takhtai and state firm Spetsvervis CEO Vasyl Petrivsky, an ex-aide to Avakov, negotiate a corrupt deal to sell sand at a rigged auction in Chebotar’s office. In the video, Chebotar implicates the minister himself in the deal, saying that Avakov is also aware of the scheme and is worried that the sand has not been sold yet. In another video being investigated by the NABU, Avakov’s deputy Vadym Troyan and Chebotar discuss corrupt revenues from the traffic police and extorting money from businesspeople.

Minister Avakov is de-facto the most powerful political figure in Ukraine, he is a close friend and backed by the oligarch Ihor Kolomoiskiy. Avakov has a huge impact on the Ukrainian law enforcement system and the courts.  Avakov, his deputy Chebotar, Troyan, Takhtai and his son Alexander Avakov avoided criminal punishment for their corruption. On March 4, 2020, Ukrainian parliament reassigned Arsen Avakov as head of the Ministry of Internal Affairs. Vadim Troyan is now Deputy National Police of Ukraine, Oleksiy Takhtai is State Secretary of the Ministry of the Interior.

I am asking your office to investigate and prevent the transfer of the US financial assistance to the Ministry of Internal Affairs of Ukraine under Arsen Avakov’s leadership. US taxpayer money should not be stolen, as Avakov stole from Ukrainian taxpayers.