I would like to inform you, that new Ukrainian government and president Volodymyr Zelensky’s administration are not fully friendly to the United States President and play a “double game”. On August 29, 2019, upon a personal request from president Zelensky, the new Ukrainian parliament reassigned Arsen Avakov as head of the Ministry of Internal Affairs. Arsen Avakov was the Minister of Internal Affairs from 2014 to 2019 under President Petro Poroshenko.

Arsen Avakov is an extremely corrupt politician, he covered up his people from the criminal prosecution in the cases of theft of state budget money. He is also responsible for the failure of the Ukrainian police reform. In addition, Arsen Avakov has strong anti-Trump political views. He helped Hilary Clinton during the US election in 2016. He played a big role in starting Paul Manafort’s case and later in fueling media attention to it.  Arsen Avakov hates the President of the United States Donald Trump and misleads the US government to get new funding from the US and steal this money.

In November 2019, during impeachment hearings, Rep. Devin Nunes made the following statement: «Probably one of the more disturbing one’s is the Ukraine internal affairs minister Avakov mocked and disparage then candidate Trump on Facebook and Twitter». 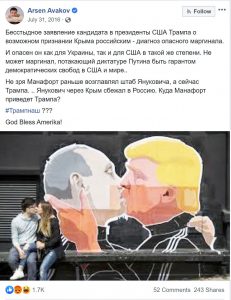 In 2016, on his Facebook official page, Arsen Avakov wrote terrible words and called Donald Trump as “dangerous marginal who is equally dangerous for Ukraine and the United States” [Appendix 1]. On August 26, 2019, on his official Twitter page, Arsen Avakov “liked” the insulting picture showing the naked Donald Trump with Vladimir Putin [Appendix 2].

The current Deputy Head of the Ministry of Internal Affairs of Ukraine Anton Gerashchenko also has anti-Trump political views. Starting in 2014, Gerashchenko worked as an adviser to Avakov and was a member and MP of his political party – People’s Front.

On October 11, 2016, on his Facebook official page, Anton Gerashchenko made the following statement: “I watched the debate of Hilary Clinton and Donald Trump. Hilary was two heads taller than Donald. With a slight smile and sparkling humor, she destroyed the remnants of Trump’s hopes for victory in the presidential race. If I was a US citizen, I would vote for Hilary Clinton”. [Appendix 3].

On November 9, 2016, Anton Gerashchenko wrote an news article that “Donald Trump has no authority in the Republican Party, and he will face impeachment” [Appendix 4].

In 2018, the Head of the Ministry of Internal Affairs Arsen Avakov and his advisor Anton Gerashchenko got US visas from the US ambassador Marie Yovanovitch and visited Washington D.C. They met with representatives of the US government and politicians who subsequently voted for the impeachment of Donald Trump. [Appendix 5]. 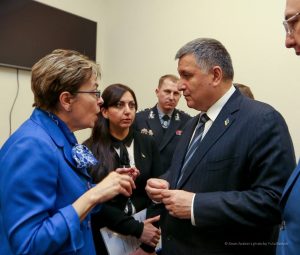 Arsen Avakov continues to beg for funding from the United States and at the same time leads subversive activities against the President of the United States and the American people. Minister Avakov is de-facto the most powerful political figure in Ukraine, he is a close friend and backed by the oligarch Ihor Kolomoiskiy, the same oligarch who sponsored Vladimir Zelenskiy’s presidential campaign. After Zelensky’s victory, the oligarch Kolomoisky stated that this was his common victory with Avakov.