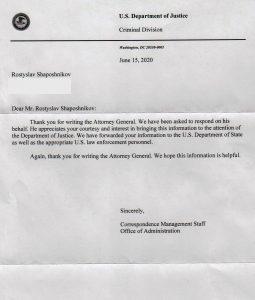 The statement to the U.S. Department of Justice:

I would like to inform you, that Ukrainian Minister of Internal Affairs Arsen Avakov covers the international drug cartel illegal activities. Avakov works closely with the US State Department and the FBI officials, and therefore this information is extremely important for US national security.

On May 26, 2020, in Ukraine, a group of killers tried to shoot Radoje Zvicer – one of the leaders of the Montenegrin drug clan Kavač. This foreign group of killers arrived in Ukraine in early May 2020. [appendix 5]. Prior to the attempted murder, they purchased firearms [appendix 4] and an unspecified number of vehicles and organized surveillance of their target. The main versions of the assassination attempt were the criminal activities of the victim, the possible redistribution of spheres of influence in the organization itself, as well as the conflict between the Balkan criminal clans that control drug trafficking. On May 27, Ukrainian police arrested this group of killers.

In 2014, Yevheny Deidei became a member of the Ukrainian Parliament in the party of Arsen Avakov “Narodnyj Front”. In previous years, Deidei and Chernobrovy worked together [appendix 6]. In 2019 Deidei returned to work in the Ukrainian police and was appointed assistant chief of the Kyiv Police Department. [appendix 7].  Deidei has friendly relations with the Minister of Internal Affairs Arsen Avakov (who commands all police officers in Ukraine). Therefore, Avakov and the Ministry of Internal Affairs of Ukraine are trying to hide the participation of Deidei and his associate Rostislav Chernobrovy in a group of killers from the Balkan drug cartel.

According to the Ukrainian police database, in 2011, Yevheny Deidei was arrested for robbery with a firearm. In 2012, Deidei was convicted by the court for robbery with a firearm. When Avakov became the head of the Ministry of Internal Affairs of Ukraine in 2014, he deleted all information about Deidei’s crimes from the databases. However, as a journalist, I received a copy of a file from the Ukrainian police database with information about Deidei’s crimes. I am attaching a copy of these files to this letter [appendix 8].   Since 2014, Avakov has been recruiting criminals and corrupt people to the Ukrainian police. Today, the Ukrainian police is an organized criminal group that hunts for journalists and public activists, sells drugs, commits robberies, takes bribes, hires, and helps killers to kill people.

I am asking your office to investigate the illegal activities of Avakov’s organized criminal group, stop financing the Ukrainian Ministry of Internal Affairs under Avakov’s leadership, make a public statement and condemn Avakov’s crimes, ban Avakov from visiting the United States and impose sanctions against Avakov and members of his criminal group.

I am also asking your office to provide me with a written response after considering my letter.